It is taking a lot longer than anticipated to complete the paperwork for our residency, so we’re on our way to Tegucigalpa for an extension.  En route we got stopped by a group of…dairy farmers!! And they weren’t checking for drugs or guns, they were checking for…butter and cheese! They didn’t want the money to leave Olancho!

Last week was of course, Holy Week.  On holy Wednesday mass, practically the whole town shut down, leaving an aura of waiting in its wake. On Thursday and Friday, re-enactments of the arrest, trial, and crucifixion of Our Lord were staged. We were told it was a pious practice to not listen to music or even wash our clothes from Wednesday mass until Easter, just because all wasn’t “business as usual” for all creation. It was surreal - as if our little world stood still in awe and thanks.

Here are pictures of the street decorations for Holy Week. 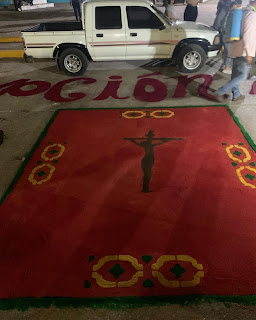 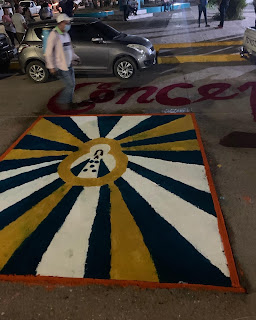 We were supposed to be in the capitol, Tegucigalpa, today to finally get our status as residents verified. Last week the family was sick and today, the van that was to take us experienced troubles on the way out of town.

This reminds me of just how much efficiency is a product of luxury: the poorer one is, the less quality of products one has access too, the less quality of products, the more they slow down and malfunction. As one used to getting things done effectively and efficiently, this has been a struggle to get used to: frustration and impatience raise their ugly heads even though it’s really nobody’s fault.

One wonders what they’re even doing if things aren’t tangibly being accomplished. In moments like this, I must remind myself of the woman who anointed Jesus before his crucifixion - chided by the apostles for her waste, she was told what she did was beautiful and that she would be remembered for it.

Another consolation was on our bishop’s letter to the migration office, bearing his motto: “patientia omnia potest”, “patience can do all things” 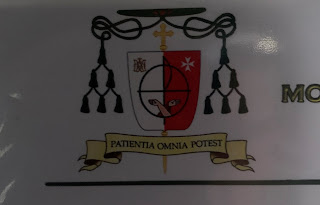 Today, we all woke up at 4:30 am (again), loaded up for Tegucigalpa (again)…and had to turn back (again!!!)  Protests against high gas prices made the city risky. If it’s this difficult to stay documented with help from locals, imagine what it’s like if locals are hostile!

In Prison And You Visiting Me

This past Saturday I (Jacob) visited the local jail thanks to the ongoing ministry of a priest here in Juticalpa. I asked to take a photo of the jail and was denied, so sorry-no pics!

I expected only a few people to be interested in talking with me - I was wrong! In a mere matter of minutes I was speaking to an entire chapel full of people! Now that I have a whole group interested, I’ll be starting a psychoeducational group on Saturdays to teach the inmates ways to challenge maladaptive thinking and cope with unhelpful emotions.

Motivation from the Lent She'himo

The She’himo, or Syriac liturgy of the hours, has some passages I find particularly inspiring in our walk with the poor. We must be made worthy to be counted among their ranks, it’s not about condescending to them. We ask to be made one with the oppressed, the same way we strive to be united with God. 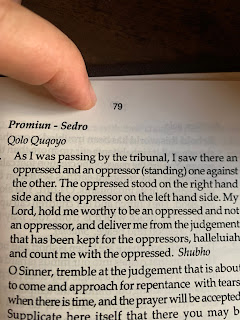 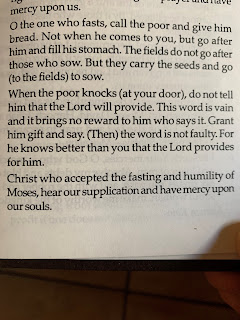 Ana (not real name) shooting me a mischievous grin while her parent interview happens just behind her.

Wanting attention is one of the most basic desires of a child. While it can be incessant, it can also teach us about being fit for the Kingdom: wanting to be seen and taken seriously by another betrays a certain vulnerability and humility. Vulnerability, because wanting to be seen (not just looked at) tells you that your attention matters to the one seeking it. Humility, because the one who wants your attention specifically seeks yours-not just any one’s. 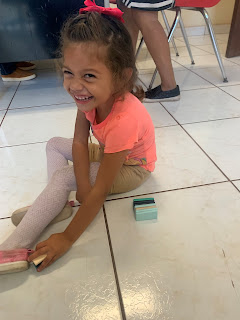 Put It In God's Hands

As I sit at my desk trying to endure the heat in our Honduran location, I think of the adventure and mission that we have been blessed with. This is my first blogpost and our story of how we came to Honduras is lengthy with a few rough spots. I must say, God's hand has been at work since forever ago (literally), but more and more I have seen His work in my life and in my family. Coming over to Honduras was a little scary for me because of all the bad news you hear about this country.

Safety was and is of primary concern for me, and for that of my children. So naturally, I worried. One of my bigger challenges was just putting it all in God's hands. Once I did, everything fell in place. Every prayer and concern I had was answered. Everything from the airport we landed in (which was one of my bigger worries) because originally we were most likely going to land in the Tegucigalpa airport, which according to several sources, ranks anywhere from the second most dangerous airport in the world to the tenth. Not a comforting thought in the least; however, when our flights were arranged, the Tegucigalpa Airport was no longer accepting international flights. Thus, we landed in the new airport right outside of Comayagua, and most importantly, it was not a dangerous airport. Our plane made a smooth landing. What a load off my shoulders! 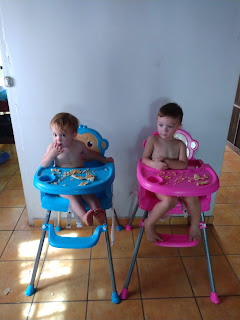 Arriving at the airport, two members of the Olancho Aid Foundation met us, took us out to lunch before proceeding to a four-hour drive to Juticalpa, where we finally were able to put our things down and rest. The following days of our arrival we were accompanied daily by someone in Olancho Aid, which was a huge comfort to us. They made sure we knew where to go shopping for necessary items, and took us to the doctor when we needed medical attention. Yes, you get the runs when you first come to Honduras. There is no escaping that one. Luckily there are doctors and pharmacies galore to choose from. Never for one moment have I thought, now what do we do? Because our support is just a phone call or text message away.

In addition to our support system, the people in Honduras have been wonderful to us. Neighbors are always willing to lend a helping hand. The first time our power went out, I only had candles available, and the power was out for several hours into the night. One of our neighbors shouted my name from the front of our house. When I came out, she had two battery powered lights to lend to us, which were a huge help. The power does go out frequently here, but usually for short periods of time. This one time was the exception. It turns out a car had crashed into a poll, and the whole thing had to be replaced. But I was very grateful to have been lent those extra lights. 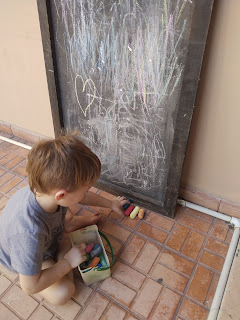 While initially I kept in mind this country is labeled as one of the most dangerous countries in Latin America, I see that not all of this nation is plagued with violence. The area we are in, as far as I have experienced, is peaceful. I thought it was so interesting when, as we had a gathering with Olancho Aid employees, someone made a comment about how Mexico is extremely dangerous. Here I witness a moment where everyone seems to point a finger at another country or place and label it dangerous. Americans do it, Mexicans do it, Hondurans, everyone! The other thing I learned which I find VERY ironic is that Hondurans, especially in rural areas, have a fear of Americans (US citizens) taking pictures of their children for fear of us kidnapping their children and selling them in the black market. And here US citizens are terrified of human trafficking in this country. Yet, it is us who are feared. While most of the time we sit and think the danger is with other people, those "others" are skeptical of us as well. 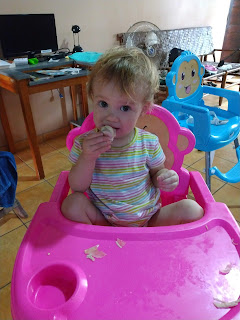 As I have started teaching English as a Foreign Language, I have been surprised by what I am learning. I never expected students would be scared to learn a foreign language in their own country. But, as it turns out, many of them are. The first day of teaching classes online, I kept asking my students if they could hear me because no one would say anything even though I was explaining things in Spanish to them. I thought maybe something was wrong with my audio. I asked a second time if they could hear me. Finally, one of them nodded and put her head down as if embarrassed. Half my class is silent a lot of times, and the other half is more willing to participate. It depends on how much exposure they have had to English. Some students come with no experience in English, while others have had classes for at least a year before coming to middle school.

While being here in Honduras has been a blessing to us, there are some challenges that we have faced. Mainly getting ourselves organized in our new place, attending our two toddlers, and dealing with work. All while going through the stress of adapting to our new environment; which, even though for the most part has been a positive experience, it is still exhausting. One of my most important accomplishments this past week was being able to set up our prayer corner. Finally! I felt it took us forever. 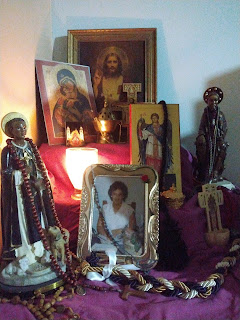 For those who might not know, a prayer corner is an area in your home you set up as a space for prayer and meditation. It can be as simple as a crucifix, an icon, and a candle, or it can be more elaborate. The idea is to have Christ in the center of your home and life. So the prayer corner holds a lot of importance to us a Catholic family. First comes Christ Jesus before all else, in the name of the Father, and of the Son, and of the Holy Spirit. One true God. 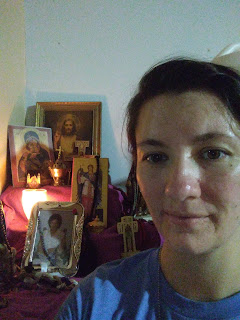 It is taking a lot longer than anticipated to complete the paperwork for our residency, so we’re on our way to Tegucigalpa for an extension....

Jacob & Nancy Pederson & Family
We are candidates for the Lay Mission-Helpers Association and are currently in the formation program in Los Angeles. We are originally from the state of Washings. We, and our two children Santi and Soliyana, have been assigned to serve in the Diocese of Juticalpa in Honduras.